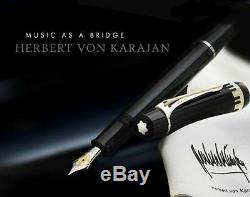 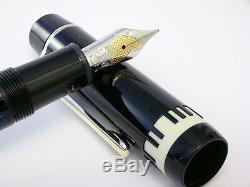 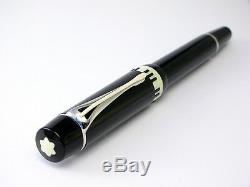 MONTBLANC HERBET VON KARAJAN FOUNTAIN PEN NEW IN BOX WITH THE SCARF. With its black precious resin cap and faceted ivory-colored ring representing a keyboard, the Donation Pen Herbert von Karajan recalls the early career of the musician, who first became famous as a brilliant pianist in Vienna.

The platinum-plated clip with its inlay in the shape of a conductors baton is a tribute to Karajans legacy as a conductor. Although Herbert Von Karajan began his unparalleled musical career as a pianist, it was as a conductor perhaps the greatest ever that he shaped the world of music in the 20th century. But Herbert Von Karajan was more than just a brilliant musician. He was also a charismatic media star, a gifted opera producer and a successful festival founder. One of Karajans life ambitions was to preserve a musical tradition for future generations.

He opened the door to success for young, talented artists, and was convinced that he could overcome barriers and bring cultures and peoples together with his music. THE PEN DOES NOT COME WITH THE BOOKLET. The item "Montblanc Special Edition Herbet Von Karajan Fountain Pen & Scarf New In Box" is in sale since Wednesday, February 27, 2013. This item is in the category "Collectibles\Pens & Writing Instruments\Pens\Fountain Pens\Montblanc". The seller is "montgomerystationery" and is located in New York, New York.

This item can be shipped worldwide.